The UCSRN tournament was a great success. 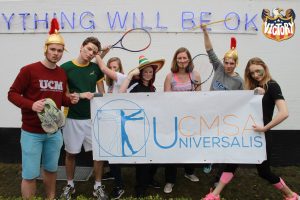 Involving over 650 students from all over the Netherlands (and the world really), the UC’s got to show of their best and most creative students in competitions ranging from Chess to Debating, to Beer chugging.There were 7 UC’s competing, as the smaller UCG and UCT joined forces to battle the other UC’s.
Throughout the day the vibrant beats provided by UCU’svery own DJ’ing committee UCDJ and the noises of students cheering for the Women’s football competition filled the campus of UCU. Also just a bus ride away, the sport fields of Olympos paved the way for the Men’s Football team, the Mixed Hockey competitions, Volleyball and Basketball.

At the same time, inside the buildings of Locke and Voltaire, the Debating clubs of the UC’s were trying to get their best arguments heard, and the Painters had picked up their equipment and started a race against time to complete the best one before 6 pm.

As the competition didn’t stop there, the Filming committees were busy creating a movie in one day (also to be handed in before 6). Whenever you walked around campus, you could see a glimpse of the snapshots and filming crews.

As was also done in the tournament last year, There was a League of Legends competition as well. For those who don’t know exactly what this entails, the following website provides some insight (League of Legends) Basically, it is a computer game in which 5 players of each UC work together in an online battle arena to protect their Nexus, and destroy the Nexus of the opponent. It entails many different strategies and nowadays teams all over the world compete in World tournaments.

Cheering for their own UC’s, the supporters definitely brought their enthusiasm to the Dance competitions. In a packed auditorium, the UC’s dance crews got to show of their fabulous moves and awesome tricks. With UCR’s very own cheerleading squad, and EUC’s dance crew having started only 2 months before the Tournament, the dance competition proved a worthy event of the UCSRN tournament. As all dance crews provided amazing performances, the judges had a hard time deciding between 2 flabbergasting dance crews. Outreagous, the dance crew of UCU came in second and AUC’s #SlayUC was the best.

Another event that could not be missed, was the Poetry Slam. A competition were the students of the UC’s brave enough to read aloud their written poems (usually with an intonation to die for) try to convince the audience of their talents to convey messages through the spoken word. LUC’s very own Cris van Eijk convincingly won this event.

And of course the baking competition, with some tasty results for the visiting students! And it does not stop there, Chess competitions, Ping Pong and Battle of the Bands, with amazing music in a festival-like setting, convincing people to defy the cold temperatures and dance their heart out. Despite the power outage somewhere in the middle, the audience kept going and the beer kept flowing.

Not to forget of course was the Beer Chugging competition later that evening, which was the last competition. And with an outstanding overall performance by AUC, the trophy was handed to them, leaving UCU behind by only a minor advantage with a determination to win next year.


Finally there was the party, filling the UCU bar with more non-UCU people than ever before. And the next day, as the students hopped on the trains back to their own UC’s, the UCU campus grew silent again. But as the last plastic cup was cleared, and key card found, the mind slips back to yesterday and concludes:
‘It was a day filled with good vibes, inspirational talents, sweaty sporters and some great inter-UC bonding.’

All pictures of the day can be found here!

UCSRN conference on utopia was a great success!